It is a cold and foggy morning here in Plant City. You forgot to turn your lights off last night, so now your battery is flat and you can't start your car. Your phone's battery is flat as well and it has been raining most of the day. So what do you do?

Let us cut to the chase: the quickest and most affordable solution is to call Plant City Towing Company for a flat battery jump start. We will send out one of our trucks ASAP with all the equipment needed to come out and give you a jump start and get you back on the road again quickly and safely.

Dead batteries are very common, especially over winter when we have long dark nights or early mornings where we forget to turn off our lights. 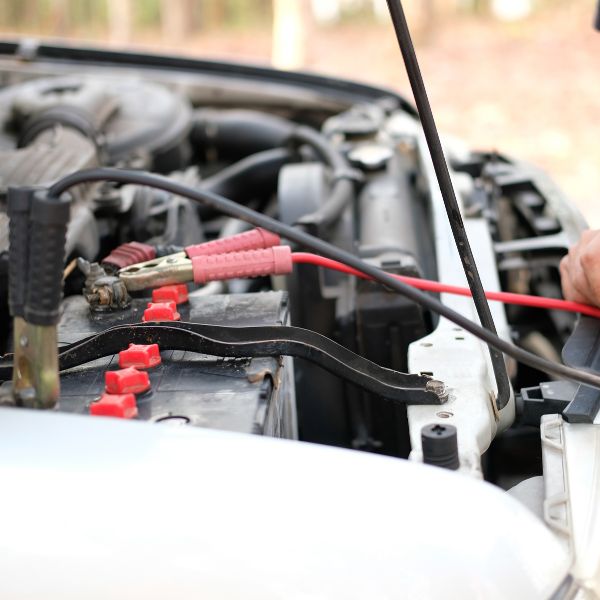 What to do if I get a flat tire?

If you ever get stuck with your flat battery, do not use excessive attempts to start your car up again as it can turn out to be dangerous. A flat battery leaves you stranded on the side of the road, and without any help nearby this could result in serious problems.

Your car should not be attempted to be started again after what is known as 'deep discharge'.

This means that your car's computer will not recognize an attempt to restart it after there has been a flat battery, meaning that the alternator won't engage.

It's best to avoid getting into this situation by having jump leads available in case your battery starts flatting out unexpectedly, which may leave you stranded if not noticed quickly enough.

Plant City Towing Company has the solution. All of our trucks are equipped with an extensive range of battery jump starters, cables, chargers and even extras like portable air compressors to get you back on the road again in no time at all.

We are available 24 hours a day, 7 days a week because here at Plant City Towing Company, emergency jump starter services are our specialty. Call us now for fast professional flat battery jump starts: (813) 640-4055.

Causes and effects of a dead car battery

If you're reading this, then you probably have a flat battery in your car. What follows is an exploration of the causes and potential solutions to flat batteries in cars. First, let's discuss flat batteries and their connection to cars.

Flat batteries are caused by a number of reasons, which we'll get into below - and we will also cover how to handle flat batteries so that they do not cause further harm and cost you money and time.

The car battery & how it works. When a car is not running for an extended period of time (generally for multiple nights), its battery can run flat as there is no longer enough power being supplied by the alternator. Generally speaking, cars rely on electricity from the alternator while driving to recharge the battery.

Once the engine is off, however, there is not enough power produced by the alternator to recharge the battery; this means that flat batteries are usually caused by idling cars, or cars that have been turned off for an extended period of time. And while flat batteries can also occur if you accidentally leave lights on in your car, leaving the radio on in your car overnight will not result in a flat battery - studies show that it takes at least 15 minutes for a flat to be caused by anything electrical in a car after shutting down.

Flat batteries are one of the most common problems with modern day vehicles as there are several factors that will reduce the life of your car's battery.

There are many things that can cause flat batteries, but the most common causes include:

​If your car's battery dies when the engine is running, then you may have a problem with your alternator. Other issues that can cause flat batteries include faulty electrical systems and loose alternator belts. If you notice that your car is losing power while it's running, then you should bring it in for service right away - if there are no problems listed on diagnostic tests, then there could be a problem with your vehicle's electrical system.

How to fix a flat battery

If your car battery runs flat, the first thing that you should do is turn your engine off and avoid doing anything with your car's electrical components. Dead batteries may happen when you turn your engine off, but turning the engine back on can flat battery even more if you're using too many electrical devices.

After turning the engine off, then check all of the interior lights to make sure that none are still on - if any are left on after checking, then shut them off before attempting to start the car again. If this does not resolve the flat battery situation, then it means that there is another underlying issue causing flat battery.

Call (813) 640-4055ou're still having trouble with your battery, call Plant City Towing Company and we'll come out and get your car up and running again.

Towing service near me

Tow truck near me

Vehicle lockout service near me

Roadside assistance near me